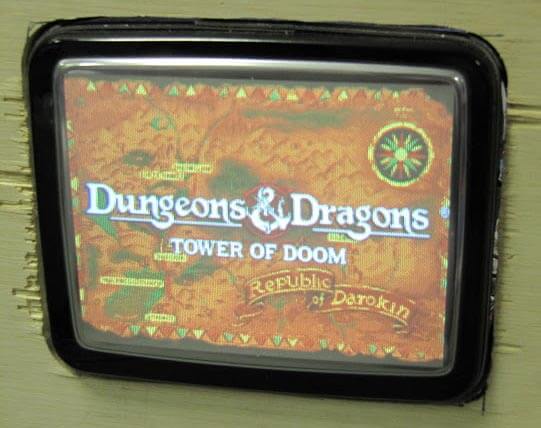 A certain subset of the arcade collecting community fell in love with these baby cute CRT monitors, with good reason. They’re actual standard resolution (CGA) tube monitors as used by classic arcade games. Also, they’re cheap! Two for $29 from Timeline, Inc. However, one major hurdle stymied the casual DIY-er: these natively accept TTL sync, not the composite video sync signal passed by most video game consoles and arcade machines. So, a sync separator circuit, like the one in this article, is required.

A few different methods were devised. (Search Samtron at KLOV for the full megillah.) A dude named PrairieDillo came up with the most practical and simple. I came along a few years later, took his design, and simplified the build even further. The result is cheap, thin, and relatively easy to wire.

For a version 1, it’s pretty good, but I would make improvements if doing a 2nd run, which probably won’t ever happen given the small niche this caters to. But those changes would be mainly to make the IC holes larger. As pictured, they’re tiny and only work with high-quality machined pin sockets. Larger would allow cheaper sockets, or no socket at all, which could save a couple bucks. The front right also bumps 2 transistors on the main PCB. I measured it beforehand, but my measurements were slightly off. Probably not even worth mentioning. But bump doesn’t hurt anything. Might make the trimpot form factor more flexible to allow cheaper trimpots. As is, that contrast control does not seem necessary; most people build them without it.

So, that’s it. Just about $10 worth of parts will do the trick. Seems easy at first glance, but the wiring harness is the part that will do most people in. But if you have basic electronic skills, then you are no longer most people. Read on as I simplify those instructions as much as possible.

Also, don’t forget a power supply. Something like the Meanwell RD-50A would suffice. Some will opt for a cut-rate “IDE” power supply. But you get what you pay for with those things.

If your questions are not answered here, you may want to see PrairieDillo’s write up from a larger thread at KLOV.

Note to self: follow-up at the spot where I promised to supply some boards.

Not all game PCB’s synchronize vertically with this circuit. Most do, but keep in mind it’s not guaranteed to work with every board. This project aims for cheap and easy by using an inexpensive sync separator (<$4) in an 8-DIP package, but one that’s distinctly lacking in a vertical hold control. If you have a specific PCB that won’t sync with this, you can try an alternate circuit using a more expensive ($11) surface mount separator IC: the EL4583C from Renesas. It uses a 20k pot to fine-tune your vertical hold.

Not enough sophistication for you?